Following on the tradition of the failed date-setting for 1953 (which they made while still part of the National Revival Crusade) the Revival Centres again blatantly predict the return of the Lord on or before September 17th, 2001. The Revivalists arrive at this date for at least two different reasons:


1. Revivalists and British Israelists subscribe to God's Great Week, a 7000 years theory (see the bottom of the article above). This belief argues Adam was created in 3996 B.C.E. and seeing as, 'a day is as a thousand years', the end of the sixth millennium (around the year 2000) would result in Christ's return.


2. The markings inside the Pyramid of Cheops, used by many Pyramidologists to set dates, stop at September 17th, 2001. Thomas Foster, Lloyd Longfield and Noel Hollins' former pastor in the NRC, made mention of a similar date. It seems they got this date from David Davidson's The Path to Peace in Our Time: Outlines from the Great Pyramid Prophecy (1942).
So there is even more evidence the Revival Centres have been involved with setting a date relevant to the return of Jesus Christ. Contrast this with the Revival Centres International statement on date-setting in which they claim they have never been party to this practice.


Interestingly, the Christian Assemblies International, a splinter group of the Revival Centres, still had this article on their website as late as 2011.
Verdict: ANOTHER FAILED DATE!
Posted by Why I Don't Believe at 17:28 1 comment: 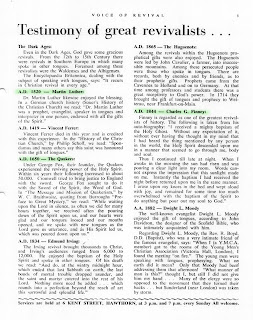 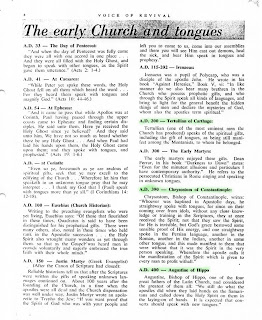 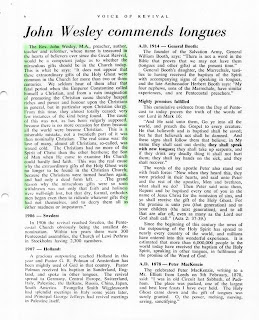 Click on the images to enlarge
It is hard to know the origin of this 3 page article. It may well have been written by a Revivalist, but I suspect it has been 'borrowed' from somewhere else and adapted to suit Revival Centre doctrine. After all, when part of the NRC/CRC, Revivalists were exposed to the books and magazines of other Pentecostal groups and there are so few other articles dealing with Church history in any detail from Revivalists. Whatever the origins, it was later republished as a Revival Centre tract/leaflet and most Revivalists were very familiar with it, even as late as the 1990s.
Evangelical Christian Dean Mischewski addressed some of the claims of the above article. Below are some excerpts of his letter (which can be found in its entirety here) to an RCI pastor in New Zealand.
======================
Tertullian
Regarding Tertullian and the Montanists, this group is well known as heretics and Tertullian's later writings (from after he joined the sect) are generally considered less valuable in terms of their teaching given that he was writing from a viewpoint out of step with the rest of the early Church. The following information on the Montanists I found online in the Catholic Encyclopedia:
It is interesting to take St. Jerome's account, written in 384, of the doctrines of Montanism as he believed them to be in his own time (Ep., xli). He describes them as Sabellians in their idea of the Trinity, as forbidding second marriage, as observing three Lents "as though three Saviours had suffered". Above bishops they have "Cenones" (probably not koinonoi, but a Phrygian word) and patriarchs above these at Pepuza. They close the door of the Church to almost every sin. They say that God, not being able to save the world by Moses and the Prophets, took flesh of the Virgin Mary, and in Christ, His Son, preached and died for us. And because He could not accomplish the salvation of the world by this second method, the Holy Spirit descended upon Montanus, Prisca, and Maximilla, giving them the plenitude which St. Paul had not (I Cor., xiii, 9). St. Jerome refuses to believe the story of the blood of a baby; but his account is already exaggerated beyond what the Montanists would have admitted that they held. Origen ("Ep. ad Titum" in "Pamph. Apol.", I fin.) is uncertain whether they are schismatics or heretics. St. Basil is amazed that Dionysius of Alexandria admitted their baptism to be valid (Ep., clxxxii). According to Philastrius (Hær., xlix) they baptized the dead. Sozomen (xviii) tells us that they observed Easter on 6 April or on the following Sunday. Germanus of Constantinople (P.G., XCVIII, 44) says they taught eight heavens and eight degrees of damnation. The Christian emperors from Constantine onwards made laws against them, which were scarcely put into execution in Phrygia (Sozomen, II, xxxii). But gradually they became a small and secret sect. The bones of Montanus were dug up in 861. The numerous Montanist writings (bibloi apeiroi, "Philosophumena", VIII, xix) are all lost. It seems that a certain Asterius Urbanus made a collection of the prophecies (Euseb., V, xvi, 17).
However Tertullian often has much worthwhile teaching, so his references to tongues may well be bona fide.


So without a solid reference in your article, it again appears that the information is wrong. In fact, regardless of whether Luther's interpretation is the right one, he would describe someone who holds to the Revival Centre's view on tongues as "the fool" who "doesn't understand St. Paul's words correctly". The way he is presented in your article is therefore somewhat ironic.
The Quakers
It is interesting to note that George Fox, under whose leadership "the Quakers experienced the reviving power of the Holy Spirit", as the article says, actually discouraged speaking in tongues (see his autobiography). However, I do not dispute the article's quotation here, as in spite of his disapproval, a number of his followers apparently went on to speak in tongues and evidence other charismatic phenomena.
Charles Finney
The citation doesn't mention tongues, and to me infers only fervent prayer after Finney's powerful experience of the Holy Spirit. I came across an interesting quote in an article from Eastern Pentecostal Bible College called "Speaking in Other Tongues - Our Pentecostal Distinctive." The article reviews the history of Pentecostalism and in mentioning the role of Charles Finney, says:
Finney would stop short of the Pentecostal position of speaking in tongues but he did claim that the Holy Spirit allowed the believer in prayer to transcend the limits of human language. Basing his position on a literal interpretation of Romans 8:26, Finney wrote that,
"the Spirit excites desires too great to be uttered except by groans. Something that language cannot utter - making the soul too full to utter its feelings by words, where the person can only groan them out to God who understands the language of the heart." [The quote is referenced to "Charles Finney's Doctrine of the Baptism of the Holy Spirit" by John Graham.]
So it seems that the article refers yet again to someone who holds the opposite position from what you are trying to prove!
The other quotations I will not dispute...In conclusion then, it appears that your article fails to prove the assertion that there have been 2000 years of speaking in tongues. While I have yet to fully examine your church's doctrinal positions, the lack of scholarship presented in your article does not reassure me when it comes to trusting the Revival Centre's Biblical exegesis. I can only assume that any errors are not intentionally deceptive but have simply been trustingly copied from other sources. I hope that it is obvious that quotations need to be carefully referenced, especially in matters as important as Christian truth.
Verdict: BAD HISTORY! 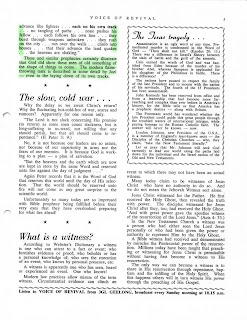 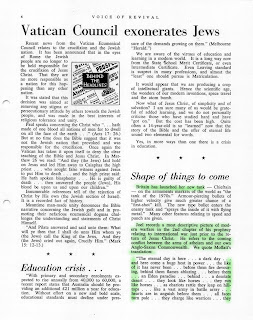 Click on the images to enlarge
They see flame throwing tanks in this passage?  Are they having a lend of us? Can you guess why the author had to use the Moffatt Translation to make his point? Have a read of the passage in the KJV or the NIV and that will become clear. There is no mention of 'tracks' in other translations because the word 'track' in Moffatt's version doesn't refer to a track as in something left behind but rather it means a 'path' or 'direction' (again, see how the other versions translate it).

And what tank looks like a horse? An elephant or rhino perhaps, but a horse? It's simply not there Pastor.
Verdict: I CAN SEE IT IF I CLOSE MY EYES!
Posted by Why I Don't Believe at 18:04 No comments: 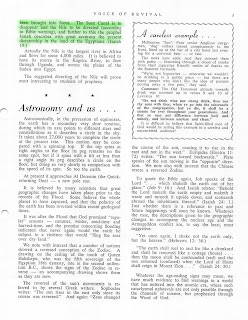 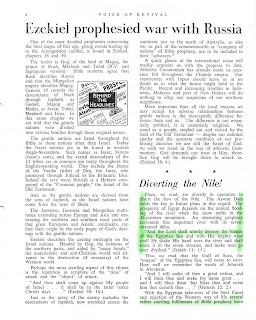 The dam was completed in July, 1970 but of course the River Nile was never destroyed.
Further Reading:
The Artificial Nile: the Aswan High Dam
Diverting the Nile in Myth and Legend 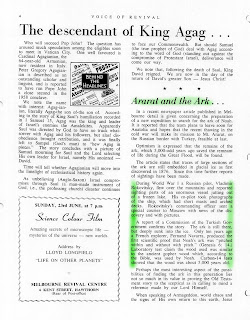 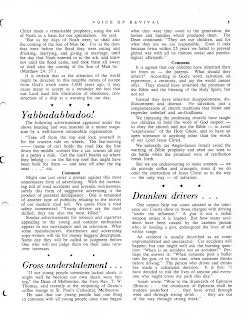 Click on the image to enlarge
This is largely a rehash of a claim they made in 1959 and has been dealt with here.
Verdict: STILL CRAP!

Can you guess what I am going to say? Yes, this never happened!
As a matter of history, the Catholic Church was very actively anti-Communist, especially Pope John-Paul II in his support of the Solidarity movement in Poland.

Verdict: NOT EVEN CLOSE!

Did Communist borders ever reach the very edges of the USA and Commonwealth nations? Of course not. A quick glance at the map below showing the former and current Communist nations in red will convince you of this.

The aim of this blog is to highlight many of the ridiculous prophecies, predictions and claims of the Australian religious cult known as the Revival Centres.

It is worth noting that the Revival Centres have been crying, 'The end is nigh!' for over half a century and we're all still here. And if they were wrong about this stuff in the past, then what are they wrong about now?

It is also worth noting that had you been a Revivalist and objected to the claims listed here when they were originally published, you would have not only been correct, but most likely 'put out' of the church.

Why I Don't Believe
This blogger has been researching the Revival Centres movement on and off since the early 1990s and has been actively involved in exposing them as a destructive religious cult. He has a Graduate Diploma in Religion and Theology and a Master of Journalism.